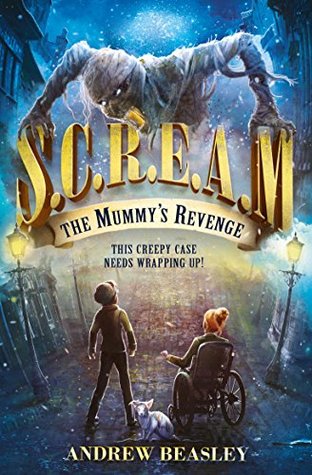 In the dark and winding streets of Edinburgh, a burglar is on the prowl. But this is no ordinary thief.

Three thousand years old and risen from the grave, this rampaging robber is a rotting Egyptian mummy – and he wants rubies and revenge!

There’s only one crime-fighting force who can deal with a menace like this: Billy Flint & Charley Steel aka S.C.R.E.A.M. – top-secret investigators of Supernatural Crimes, Rescues, Emergencies And Mysteries. 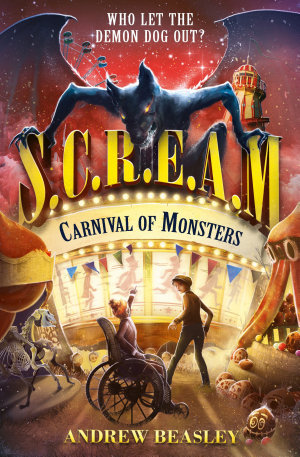 Roll up, roll up, if you dare, to Doctor Vindicta’s Carnival! Gasp at the dancing ghosts! Grimace at the creepy clowns! It’s all harmless fun and frights…until a young boy disappears and his sister swears he was snatched by a monster. Only the bravest detectives can detain a demon: send for supernatural investigators Billy Flint and Charley Steel!

I’ll write a general review for this duology. The S.C.R.E.A.M. series is a middle grade historical fiction featuring a main character with a disability, lots of action and the supernatural touch that I love in a book.

I found the first book casually, searching for “mummy” books on Amazon. I’m really happy to have found it and to have read it, it’s a really underrated series, but look at the amazing covers!! Aren’t they great? Have you seen the detail on the cover of Carnival of monsters? Isn’t funny? I laughed when I saw it!

As I said, this series features a main character with a disability: as you can see from the covers, Charley Steel, the female MC, is on a wheelchair, but this certainly doesn’t stop her from being intelligent, wise and incredibily brave, and I know children will love her, along with Billy, the boy with a troubled family and some paranormal powers.

Both of the books are really intense and historically interesting, the second one (Carnival of monsters) is a little darker than the first, because includes children abduction and evil demons, just to let you know.

My only regret with these books is that I want to know more about the S.C.R.E.A.M. department, how has begun for example and also that this is a duology (for now), because I want to read more books with Charley and Billy!!

For now, thanks to Andrew Beasley for writing such an amazing series.

How you read it? Do you like the covers? Tell me in the comments!

I'm Diana, 34 y.o. from Italy. I love to read English books, so I decided to open a second blog. View all posts by Diana @fortunatelythebook

📚Stack for a cause 📚
Better late than never, my December wrap up:
Time to show the books I've received for Christmas and the book shopping I made visiting Bordeaux and Toulouse!
⭐ Bookstack for a cause ⭐
New book that I bought at @bradley_s_bookshop in Bordeaux at the end of December, plus the gorgeous bookmark bought at the musee of beaux arts.
Book review: Christmas dinner of souls

Diana's ReaderRank
Diana has reviewed 1507 books with an average rating of 3.314 out of 5.
479 people have found Diana's written reviews to be helpful on Goodreads.
See more...

Top 1% based on reading volume