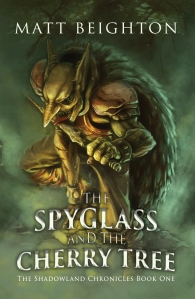 Title: The Spyglass and the Cherry Tree
Author:  Matt Beighton
Genre: Upper MG/YA Fantasy
Release Date: June 2017
Signed copies on Etsy: https://www.etsy.com/uk/listing/577769183/the-spyglass-and-the-cherry-tree-the(£1 off at Etsy with the code SPY100 (until end of November).

Some people fall down rabbit holes. Others hide inside magical wardrobes. Skye Thistle looked through an old spyglass.

Lost and alone on a world filled with Goblins, Orcs, Dragons and others that, until now, she was convinced existed only in fairy tales, Skye wants only one thing: to return home.

If she’s to have any chance of getting home safely, Skye must overcome her own fears and prejudices and embrace the prophecies that she fears have already sealed her fate on the distant world of Ithilmir. All that stands in the way of restoring peace and balance is a fearsome and worryingly familiar Dark Queen.

Goblins are very real, and whether Skye believes in them or not, she’s their only hope.

Readers around the world are enjoying the complex mythology and descriptive world building of The Spyglass and the Cherry Tree, the first adventure in the Shadowlands Chronicles.

First of all, thanks to YA Bound Books Tour for giving me a free copy of this book.

The cover is the reason I decided to request this book, because it’s the perfect cover for an MG/fantasy/adventure book.

The beginning is like a lot of other fantasy: a normal girl who has a mother who strongly believes in Fairies and Goblins, is forced to spend her holidays with her grandparents.

But when she watches throught the old spyglass she doesn’t believe at her own eyes! A new planet? Skye hasn’t the time to be happy about that, because the Spyglass transport her on that planet!

She is lost and alone, afraid of the dark and the sounds of a forest, and soon she is surrounded by Goblins. And not the kind of Goblins we usually know.

I must admit that I didn’t give a high rating at this book because a lot of world-building information are given to us step by step, with long and sometimes boring monologues by this or that character.

When finally the long journey of Skye began, I was there thinking that this story reminds me of another: The Hobbit. We had a main character who is afraid in a perilous world; we had a group of people that are not the same race of the MC; we had a powerful enemy and a long journey in the wild world.

However, this book is really adventurous and it’s not predictable. I like a lot all the mythology of the different species and the background story. Skye is really a likeable character, totally human at the beginning and who grows during the entire book. 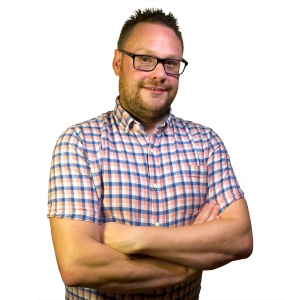 Matt Beighton was born somewhere in the midlands in England during the heady days of the 1980s and continues to spend most of his days in the same shire. He is happily married with two young daughters who keep him very busy and suffer through the endless early drafts of his stories.

When he’s not writing, he teaches primary school (Kindergarten to some of you), messes around on canals in his inflatable kayak and supports his beloved Leicester City.

He is currently recruiting avid readers of children’s books for his Street Team. Find out more and request to join at http://mattbeighton.co.uk/street-team.

I'm Diana, 34 y.o. from Italy. I love to read English books, so I decided to open a second blog. View all posts by Diana @fortunatelythebook

1 thought on “Review blog tour: The Spyglass and The Cherry Tree”

📚Stack for a cause 📚
Better late than never, my December wrap up:
Time to show the books I've received for Christmas and the book shopping I made visiting Bordeaux and Toulouse!
⭐ Bookstack for a cause ⭐
New book that I bought at @bradley_s_bookshop in Bordeaux at the end of December, plus the gorgeous bookmark bought at the musee of beaux arts.
Book review: Christmas dinner of souls

Diana's ReaderRank
Diana has reviewed 1507 books with an average rating of 3.314 out of 5.
479 people have found Diana's written reviews to be helpful on Goodreads.
See more...

Top 1% based on reading volume